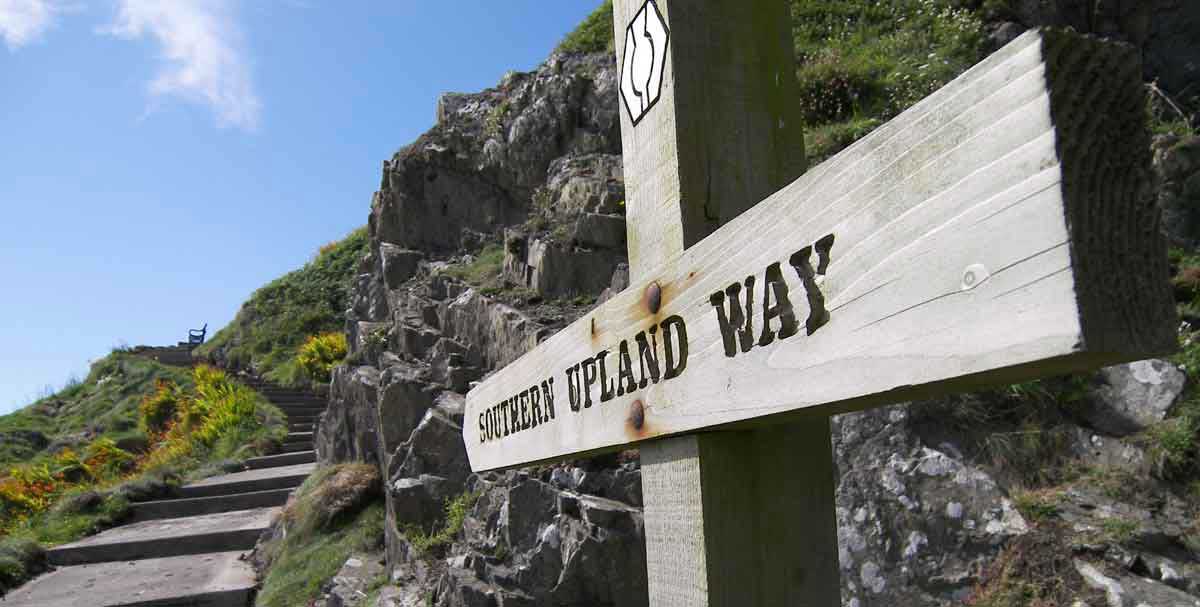 The Southern Upland Way is the first official coast-to-coast long distance hiking path in Scotland. It runs 212 miles (341 km) across the country from the Atlantic Ocean to the North Sea from Portpatrick on the west coast to Cockburnspath on the east coast.

The Southern Uplands is situated in the southernmost area of Scotland, just north of the northern English border. The route offers superbly varied and breathtaking sceneries and a tranquil, undisturbed hiking adventure.

As mentioned, The Southern Upland Way provides a wide scenic variety. It includes rolling moorlands as well as some loch and river-side walking. Although the route takes you through a few towns and villages most of the walk is spent walking through quiet, often isolated, areas. It’s not rare to spend a whole day walking without bumping into another person.

It starts in the west leading you north along the edge of rocky cliffs before turning east towards sheep pastures, moorlands, and forests. The route ends with a stunning cliff-top walk similar to that at the start and takes around 12 to 16 days to complete.

While the terrain is manageable, some of the longer stages (30 to 40 km per day) can be too much for less experienced distance hikers. Thankfully, you can arrange to be collected half way through the stage, driven to closest accommodation and be dropped off at the same spot the next morning. Also, if you are short on time, you can split the route into two parts from Portpatrick to Moffat and from Moffat to Cockburnspath. Each part can be done in 6-8 days.

The Southern Uplands have been sculpted by glaciation that turned the area into a series of rolling hills with rocky outcrops here and there.

For the most part, the trail is not that challenging as there aren’t that many steep climbs. You will not have to conquer any peaks above 3000ft (914m). Nonetheless, the terrain rises above 2000ft (610m) on around 80 occasions making for delightful hill walking. Rougher climbs can be expected leading up to St Mary’s Loch after which the trail takes you through heather-clad hills and big rivers.

The Southern Upland Way is generally very well waymarked with the standard simplified thistle symbol on wooden posts. Also, the trail is usually very obvious. Nonetheless, maps are a must and compass is highly recommended. Crossing moorlands can get tricky, especially when it gets foggy. To be on the safe side, you might want to learn how to use a compass and map together. The Southern Upland Way is waymarked throughout but involves moorland crossings which could be tricky to navigate in mist.

In general, it’s best to walk the trail between May and October. In winter, the weather is too cold, rainy, foggy and pretty much designed to make your life miserable. Since this route is not as widely popular as, for example, West Highland Way or the Great Glen Way you don’t have to be afraid of crowds during June, July, and August.

Bed & Breakfast. While the official route usually avoids passing directly through town and villages, it passes by a reasonable number of accommodation options. For the most part, the B&Bs or small hotels are close to the trail. However, in the eastern section of the way, you will need to diverge a few miles from the path to find a bed for the night. This is where the B&Bs are also further apart, so if you depend on them, you need to plan your itinerary carefully and probably book your place in advance – just to be sure.

Bothies. Bothies are unlocked mountain shelters that provide four walls and a roof to travelers, but that’s about it. Do not expect any other services such as a toilet or running water. If you plan to spend a night in a bothie, you need to have at least a sleeping bag and enough water and food supplies. Just come and let yourself in. You will be all alone or you might have to share it with other hikers. Before you leave, clean up after yourself! Bothies are run and cared for by volunteers of Mountain Bothy Association, so respect their work and leave the bothie ready for another hiker.

Camping. There are a few campsites along the way, listed in the Southern Upland Way accommodation guide. However, the Southern Upland Way is full of remote areas and this extremely suitable for wild camping which is legal in Scotland. You will be afforded a great deal of flexibility. If you do decide to camp, make sure to get familiar with and adhere to Scottish Outdoor Access Code with information about how to wild-camp responsibly.

The most helpful guidebook available is The Southern Upland Way by Cicerone Press. Last updated in 2013, it’s the most current printed guide on the market. It divides the walk into 13 stages, provides you with maps of the trial and accommodation, travel and health and safety information. It’s hard to get hold of in a store, so it’s probably best to purchase it online from the official Cicerone Press website. It’s available in a printed, electronic and Kindle versions.

If you want to be really sure the information you have is completely up to date, check the official Southern Upland Way website.

Also, keep an eye out for John Dippie’s Well. It hides in the Lammermuir Hills, near the small village of Longformacus, near where the route crosses the River Watch Water. It’s marked by a carved headstone which tells the travelers that there is no sweeter water than here in Lammermuir Hills. John Dippie was a local gamekeeper. The secret behind the sweet water of his well was that he added some good old whiskey to it before people satisfied their thirst.

Travel Along The Route

There are only two railway stations directly on (or near)  the route, in Sanquhar and Galashiels with links to Edinburgh. These are usually the spots where people choose to split the walk into two parts.

All the information about bus and railway services can be found on Traveline Scotland and the National Rail websites, respectively.

The Southern Upland Way offers a rare escape into the wild. Since the route is not as popularized as some of the other trails in the UK, you are afforded an experience filled with quiet solitude of nature and the untamed atmosphere of remote wilderness. It’s not too challenging, so even the fewer experiences walkers can enjoy it as long as you plan the stages carefully and don’t overstep your capabilities.

Scroll back to top