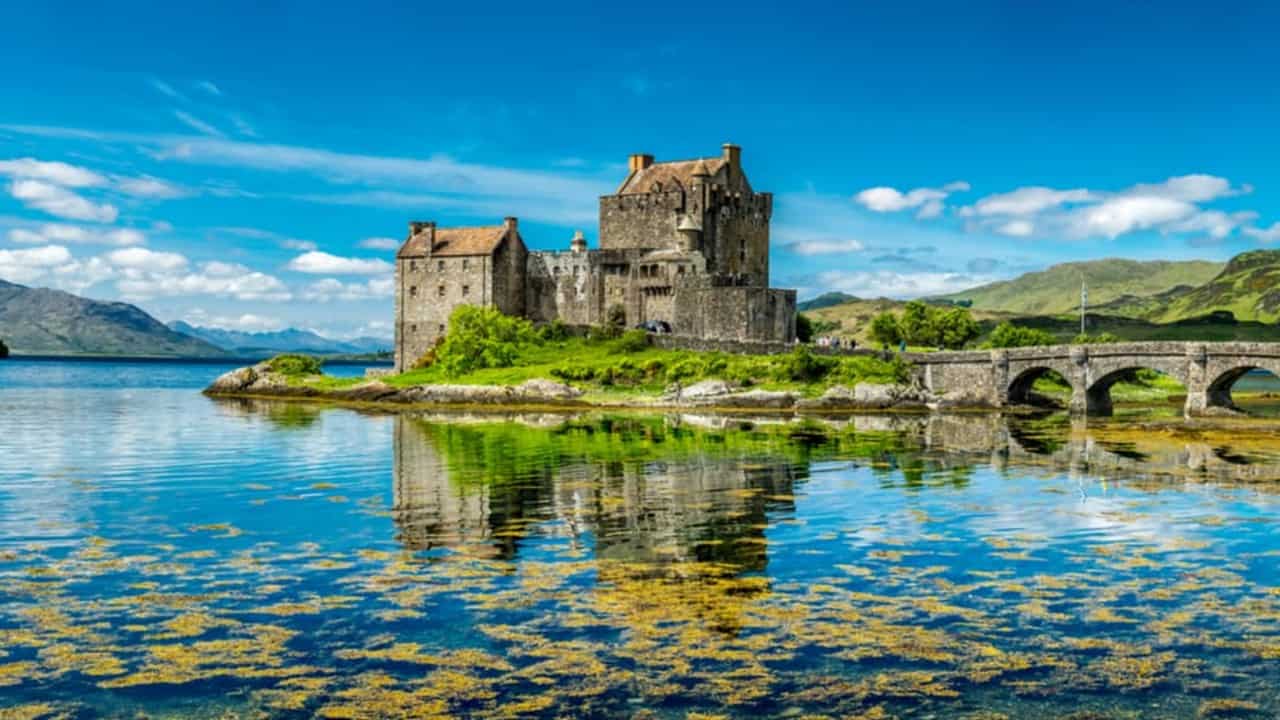 You’ve finally made the decision – you’re going to visit Scotland. You know which places you want to go to and what activities you want to engage in. However, there’s still one thing you’re unsure about – when’s the best time to travel to this mysterious land of tartan and whisky?

The answer to this question depends on where you want to go and what you want to do there.

Scotland is one of those countries that are worth visiting all year round. Whether you’re interested in the exciting festivals of the summer, the beautiful foliage of autumn, or the wintery snow mountain peaks of the Scottish Highlands, you are guaranteed to have a great time.

However, if you’re still unsure where and when to start, we have good news – this handy guide should help you determine when’s the best time to visit Scotland.

Just like many other European countries, Scotland attracts most visitors during the summer months. The period between June and August brings more daylight hours, and that’s when most festivals and activities take place around the country.

However, many folks decide to visit Scotland during the shoulder season as well. Visiting this beautiful country before and after summer is the best way to avoid summer crowds while still being able to enjoy agreeable weather.

What about the weather in Scotland? This country has a temperate climate, which translates to moderate temperatures during the entire year. Average temperatures range from about 63°F (17°C) in summer and 41°F (5°C) in winter.

On average, the warmest time of the year is during July and August. The driest month, on the other hand, is typically April. May and September are, in our opinion, great for sightseeing – these shoulder season months usually enjoy fair weather.

An important thing to talk about here is rain. In general, Scotland’s rainiest season is during the winter. One can expect colder and wetter weather between mid-October and late March.

In Scotland, summer takes place from June to August. As expected, this is the time of year that attracts most tourists – more daylight hours and higher temperatures allow visitors to engage in countless outdoor activities and to visit a music festival or two. Those who prefer quieter holidays should visit Scotland during May and September.

However, visiting Scotland during these months means missing out on a lot of events and festivals. In addition, the warm months between May and September are when the famous attractions are far more likely to be open (even though some of them stay open as late as October). Finally, island hopping and driving tours are activities that are a lot more pleasant when engaged in between May and September.

August is the time of year when most people choose to visit Scotland. This is particularly true for places such as Edinburgh, the Scottish Highlands, and the Isle of Skye.

In Scotland, the “off-season” period lasts from October to March. During this time of year, weather can get pretty cold – average January and February temperatures rarely go above around 41°F (5°C).

Although a normal occurrence in the Highlands, snow is not something you’re likely to see in the Scottish towns and cities. On average, it snows only a couple of days a year, typically between December and March.

During this time of year, not many activities are available. There’s not enough daylight available to take advantage of driving and sightseeing. However, this doesn’t stop many people from taking a trip to Scotland to visit the Highlands, which are particularly gorgeous in winter. Smaller crowds are a nice bonus!

Edinburgh, the capital of Scotland, is a buzzing place all year long. It’s an ideal destination for a city break regardless of the season. Whether it is spring, summer, autumn, or winter, Edinburgh has a lot to offer.

In addition, day tours from Edinburgh (to Highlands and other places) are available all year long. However, to take part in the famous summer festivals, your best bet is to visit this beautiful city during August.

Are you wondering when is the best time to visit the Highlands? One of the most famous (and popular) locations in Scotland, the Highlands has it all – from romantic forested areas to waterfalls to world-famous Highland games.

In our opinion, the best time of year to visit this area is during the summer. This is when the Highlands have most to offer, allowing visitors to take part in numerous activities such as hiking to tall peaks or participating in boat tours that take place on grand lochs.

If you’re not planning to go further than Highland Perthshire, on the other hand, your best bet is to take the trip during autumn. The autumn foliage you can see in the 4th largest county of Scotland can easily rival that of New England.

Scotland has a very rich history. If you’d like to see some of its castles and many other important historical sites, your best bet is to make the trip between spring and autumn. This is because during winter a lot of castles are opened only during certain days or have reduced hours.

For example, Drum Castle and Crathes Castle are only opened over the weekend days between October and March. Blair Castle, on the other hand, is closed from November to March. The Scottish home of the Royal Family, Balmoral Castle, can be visited only between April and July.

This coastal road has become a very popular destination in recent years, and for a good reason – there’s plenty to see and do. It takes between 5-8 days on average to travel down this winding road from start to finish.

If you’re planning to take a trip down North Coast 500, you may want to do it during a shoulder month such as May or September. To travel down this road during June or July means enjoying more daylight hours, but that’s also when the route is the busiest.

To travel down this road during winter, on the other hand, means fewer daylight hours, sights, and activities. So, once again, make sure to choose a shoulder month – early autumn or late spring months are your best bet.

There are hundreds of different events taking place all over Scotland every year – Scots love a good party! There is something for everyone, with festivals and events dealing with subjects such as music, literature, theatre, history, and art.

In January, a lot of places all over the country celebrate Burns Night. As its name suggests, this event celebrates the life and poetry of Robert Burns. Edinburgh Fringe Festival, on the other hand, is the world’s largest arts festival. This festival is held every year in mid-August and makes the entire city come alive with various demonstrations, displays, and shows – it’s the busiest time of the year to visit Edinburgh.

Highland games deserve a special mention – they’re held in dozens of different places all over the land and include athletic events, bagpipes bands, and highland dancing. One of the biggest Highland games events is held every year in Dunoon and it’s called Cowal Highland Gathering.

Rare are the countries where hiking is as spectacular as it is in Scotland. The trails are breathtaking and the scenery is unforgettable – Ben Nevis, located next to Fort William, is the highest mountain in the United Kingdom.

The best time of year to visit the UK’s northernmost country to travel over its hills and mountains on foot is the period from the month of April to the month of September. During this time, you’ll be able to enjoy fair weather, longer days, and more accessible trails in Scotland.

Did you know that Scotland has more than 900 offshore islands? All of these offer different sites, attractions, and landscapes – spending a day on a Scottish island is an unforgettable experience.

The best time to get on a boat and visit one of these wonderful places is during warmer days when the weather allows visitors to fully enjoy the natural beauty. You may want to avoid island hopping during the winter – the weather can get really unpredictable which often leads to rough seas and canceled ferries.

A Family Trip to Scotland

Traveling to Scotland with your whole family means making unforgettable memories together. Slow-paced summer tours are, in our opinion, the best choice for families – get up there during a warm month like June, July, or August, and you won’t regret a day of it.

Another important thing to mention here is that there are a lot more kid-friendly activities available during the summer. These include pretend-jousting games, the already-mentioned Highland games, boat tours, and many more. There’s something for every young adventurer – your kids may even beg you to travel to Scotland the next year too!

Keep in mind that children won’t be able to get inside whisky distilleries for tours. As in most parts of Europe, the minimum drinking age in the UK’s northernmost country is 18.

If you’re one of those people who love keeping an eye out for wild animals, you won’t regret taking a trip to Scotland. Here’s when is the best time to visit Scotland if you’re into wildlife watching:

These animals usually give birth around late November. In other words, you may have a chance to see seal pups, which is something you won’t forget anytime soon.

To raise their babies, these majestic birds migrate to Scotland in spring. In fact, one of Europe’s largest colonies of these birds can be found on Bass Rock, which is only 20 miles away from Edinburgh.

The best time of year to watch dolphins in Scotland is in July. However, dolphins can also be spotted during autumn and spring.

Minke whales can be seen every year between May and October. Killer whales, on the other hand, can be spotted around Orkney and Shetland islands during the summer.

These animals are smaller than average grey squirrels and can be seen all year round in Scotland. In fact, those who want to see these animals really do have to head north – 85% of the UK’s red squirrel population is located in Scotland.

Most people agree that this majestic bird of prey is among Scotland’s most interesting animals. The best time of year to see these birds is during early spring.

The UK’s northernmost country has a huge population of red deer. The best time of year to visit Scotland to observe red deer is during their breeding season, which takes place from September to November.

These lovely birds can be found along the Isle of Staffa and the Isle of Mull. Spring is a great time to visit Scotland if you want to see these cute little seabirds.

This carnivorous mammal hunts and breeds in water all year round. To get to see otters in their natural habitat, your best bet is to travel to the Isle of Skye and look for them in the late evening – that’s when otters are most active.

Obviously, these animals are not wild. However, a lot of people who visit Scotland want to see them during their journey. They can be seen between early Spring and Late Autumn, when they’re kept in fields and easy to spot during guided tours.

Midges are tiny black insects that leave itchy bites and are usually found in the islands and Highlands of Scotland. When it comes to these pests, the summer is undoubtedly the worst period.

If you’ve had to deal with midges before and would like to avoid them at all costs, make sure to visit Scotland during the shoulder season. Pick a month such as April or September in order to avoid these pesky insects during outdoor activities. 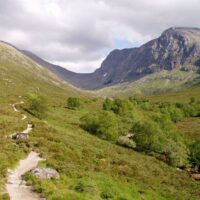 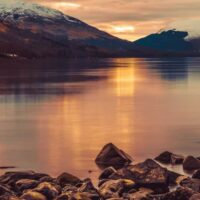